Forró and Relationships - The Results

Firstly, a massive thank you to all who took part in our survey. The topic of relationships and forró has clearly been a hot one luring 143 of you to submit your views. In fact we have had to upgrade our Survey Monkey account just to be able to analyse the results!

So, what exactly have we discovered about ourselves and our love lives? Well, some pretty intriguing stuff.

Overall Of the 143 people who responded, 68% were women and 32% were men. Although sadly this proportion does often reflect of the numbers of men and women in our forró communities, we must also consider the possibility that women are more keen to fill in surveys about relationships. In terms of forró, 78% of responders have been dancing for over a year with a whopping 50% dancing 3 years or more, so all in all, it was a pretty experienced bunch that responded.

Regarding relationship status, almost half the group claim to be single (48%) with a few less in a relationship (38%) and the rest either in an open relationship (5%) or intriguingly unsure (10%). Surprisingly this split is almost identical for both men and women. Who’d have thought?

How would you describe your current relationship status?

“Once in a relationship, dancing is harder to manage, as it can sometimes be quite sensual even when platonic” - anonymous

Perhaps what is interesting, is that people who have been dancing forró longer were more likely to be in a relationship. 73% of newbies i.e. dancing less than 6 months said they were single, whereas the number drops to 30% for those dancing over 6 years.

We guess it makes sense that single people are drawn to forró as they want to meet potential partners and have fun, but once you're in, you're likely to stay in, even if you do find love! Unfortunately we don’t know if those that are in relationships are going out with other forrózeiros…. A question for the next survey perhaps.

The juicy stuff We asked whether dancing forró makes it harder to have a relationship, and are pleased to announce that a grand 49%, said "No". 24% said that forró does make it harder and 27% were not sure.

Intimacy If we look at the figures relating to intimacy, 26% said they have not been intimate with anybody from forró (which we think is quite high considering 78% of respondents have been dancing for over a year), 41% have been intimate with ‘1 or 2’ and 26% with ‘several’ partners.

Since dancing forró I have..

An adventurous 4% have ‘lost track’ of the amount of partners and a further 5% said ‘mind your own business’. Interestingly this last group have all been dancing 3 to 6 years..We wonder what significance that has?! Hummm.

As to be expected there's a clear correlation between the amount of time people have been dancing and the amount of people they have been intimate with, as the graph below demonstrates. We guess this simply indicates that given more time dancing, there are more opportunities for romance..

However, what is more interesting is how people perceive forró to have influenced their love lives….

“Forró is an amazing dance and you can often feel a great connection with people when you're dancing. If you're both single then great, enjoy! But if not then it can feel complicated and if you are intimate with someone at forró and then things don't work out it can change the whole experience of coming to forró!” - Anonymous

How has forró effected your love life?

When asked how forró has affected their love lives, gladly 42% said that forró made their love lives more exciting, 21% said more complicated, 30% said it had not changed it much and 7% said it had been a disaster. If you've just started dancing forró, rest assured.. All the people who said it’s been a disaster have been dancing for over a year, so if you've just started dancing, don't panic.. at least you've got a good year before the risks set in.

Do multiple relationships complicate your love life? Another clear trend is the link between having had several lovers at forró and also a more complicated love life.. Not much analysis is required there.. Similarly the highest proportion of people who've never had a lover at forró (48%) are asking what has forró got to do with their love lives.. Clearly very little in their cases.

Comparing the number of forró lovers with

the effect of forró on our love lives

“I was in a relationship with a person who blamed forró for it falling apart- they were a dancer as well. I can partly agree with that, because forró satisfies some of the needs that are usually satisfied in a relationship.” - Anonymous

The differences between men and women In terms of the number of forró partners, it seems men are slightly less likely to have hooked up with a fellow forrózeiro, with 33% having never been intimate at forró compared to just 23% of women. Equally it's the ladies that are being a little more exploratory than the guys with 75% of them onto single or multiple lovers as opposed to just 60% of men. Surprised?

Despite this fact, 56% of men feel forró has made their love lives more interesting, as opposed to just 36% of women. Erm.. guys, what were you doing before forró..and what does this say about forró lovers??

Gender balance over the years

Just to bring our little exploration to a close, we'll point out that the gender balance throughout people's years dancing forró is staying relatively consistent. We may have a few more girls, but at least the guys we have are sticking with it.. and to keep these stats coming in, we're hoping it'll stay that way.

We hope you've enjoyed this little delve into the unspoken world of forró and relationships and thanks again for taking part if you did. We have loved reading the comments that some of you posted too, sadly too many to include them all here. Thanks also for the suggested questions……..No doubt we will be including some of them in our next survey whenever that may be. 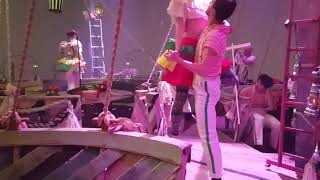 Over £1,600 raised to bring back live music at the Church

Is forró changing for the worse and getting too competitive?

Our first monthly forró JAM was a success!

Forró and Relationships - The Results

5 Reasons to go to forró festivals